An impressive home which is aesthetically beautiful as well as practical

In 2013 Norton Timber was asked to design a two storey, green, oak frame extension to not only sit alongside the existing cottage but to knit into it. Parts of the first floor oak frame would end up sitting on large steel beams this to enable the creation of a large open plan kitchen. The design also had to accommodate the creation of two bedrooms one with an ensuite over the new kitchen. The two story extension was to have an oak framed glazed link leading to a single story fully oak framed sun room. Norton Timber worked closely with our client and a design took shape.

The build took place throughout the wettest winter on record which, owing to the need to clad the sand blasted oak frame in pre painted plaster board giving a finished product, resulted in some very odd working hours between high wind and torrential rain which had to be kept off the plaster board. On one memorable late night session working in a lull in the terrible weather, bacon sandwiches were supplied by the client and were very gratefully received by the team.

The original drawings with which we were supplied to design the frame had a three sided porch/balcony nestled into the corner at the point where the old and new builds met, with the balcony being accessed from two bedrooms. This needed to be designed by us as there were no detailed drawings with which to work from. This has proved to be a very successful detail which, owing to its complexity, we are very proud of the way we got over a challenging element of the project.

Once the fabric of the build was completed we turned our attention to the cladding of the huge steel beams which ran over the kitchen. Using kiln dried oak so as to avoid any movement, we managed to maintain the oak theme throughout and hide the unsightly steel beams.

The results are generally considered to be a truly stunning building with all aesthetic and practical targets asked of us having been met.

The client is so happy and impressed with the finished build he has commissioned Norton Timber to design and build the second phase of the remodelling of their house; this consists of another large extension to the other end of the original cottage, which we will be commencing in the second half of 2016. 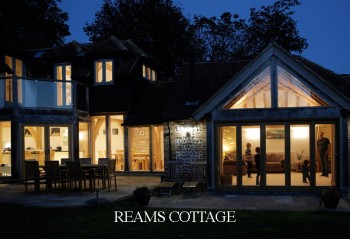 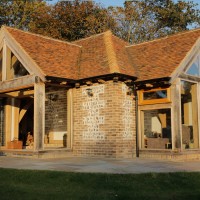